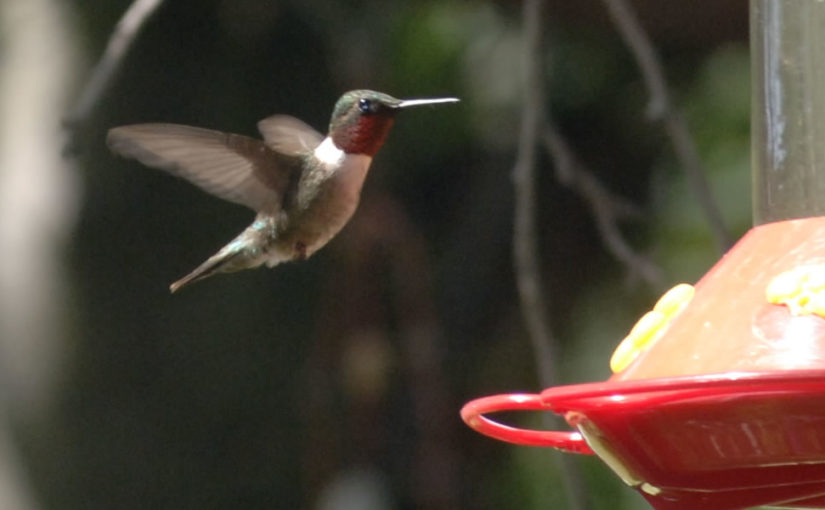 With frequent talk of neonicotinoids in the news, awareness of pollinators like butterflies and bees has grown in recent years. What is known: habitat loss, lack of suitable forage, and pesticide use are the primary causes of pollinator decline. What is seldom noted is that these pressures are not limited to insects. The perils faced by all pollinators continue to escalate but some are getting help.

For over forty years Lois White of Smithfield Illinois has admired, studied, fed and advocated for the protection of hummingbirds. The Central Illinois farm where Lois and her husband Creel reside has been their home and livelihood for over fifty years. Perched along the Spoon River valley, their property bears more resemblance to a diverse wildlife preserve than to the agricultural model on which it was founded. With prairie and woodland, streams carpeted by stone, and a legacy of sensitive farming practices, the farm, now known as Hummingbird Haven, is a sanctuary devoted to the wild occupants that it benefits. 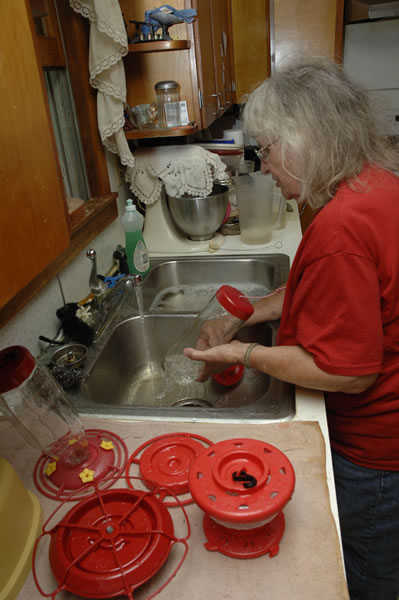 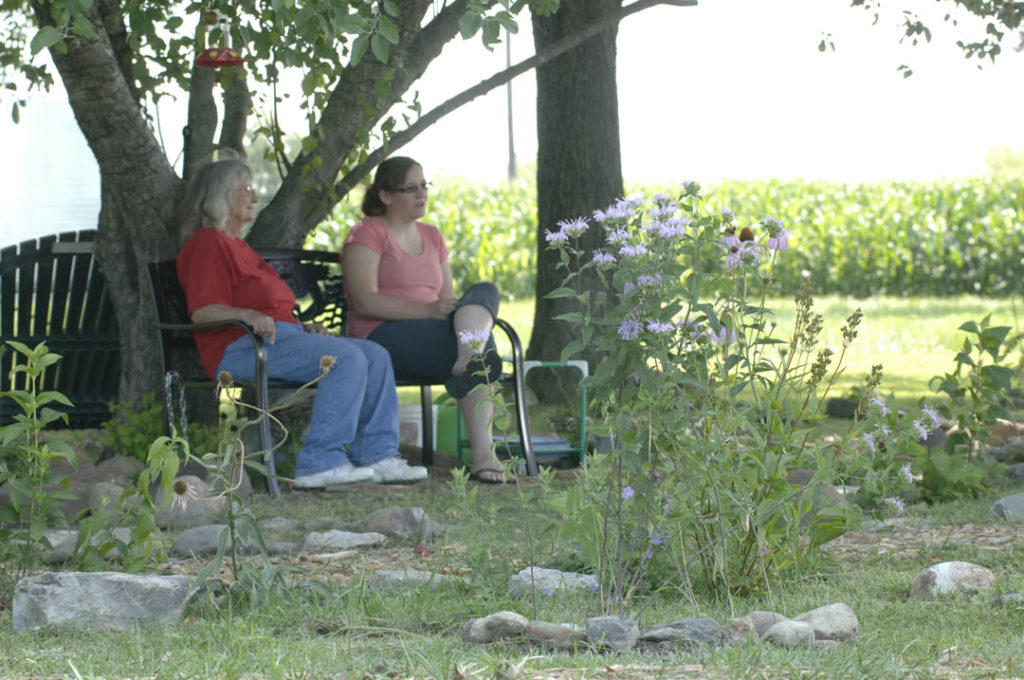 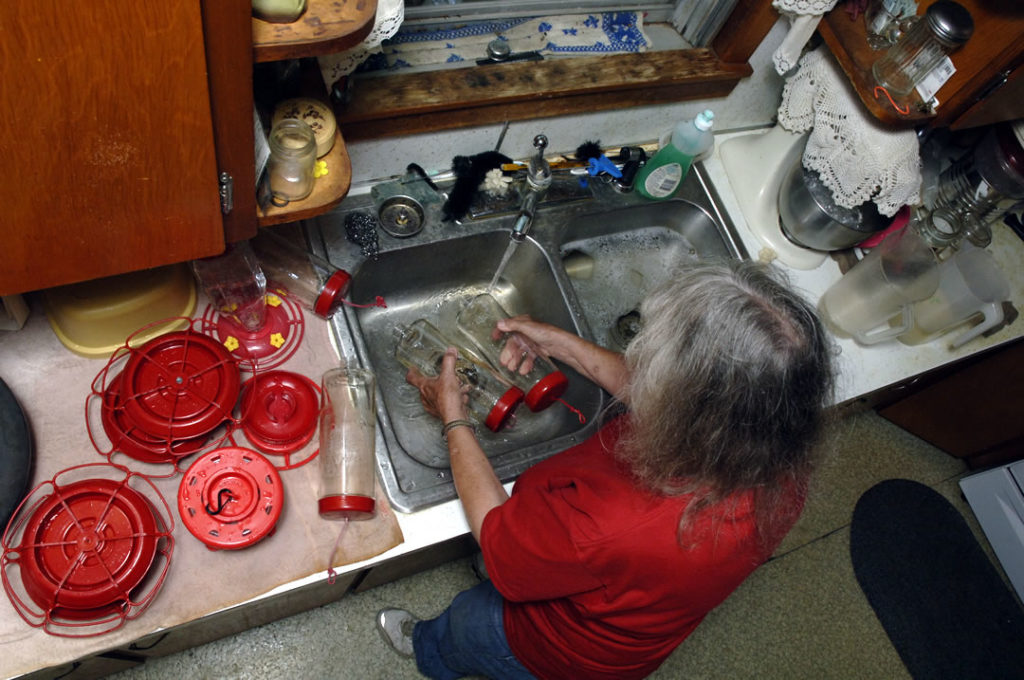 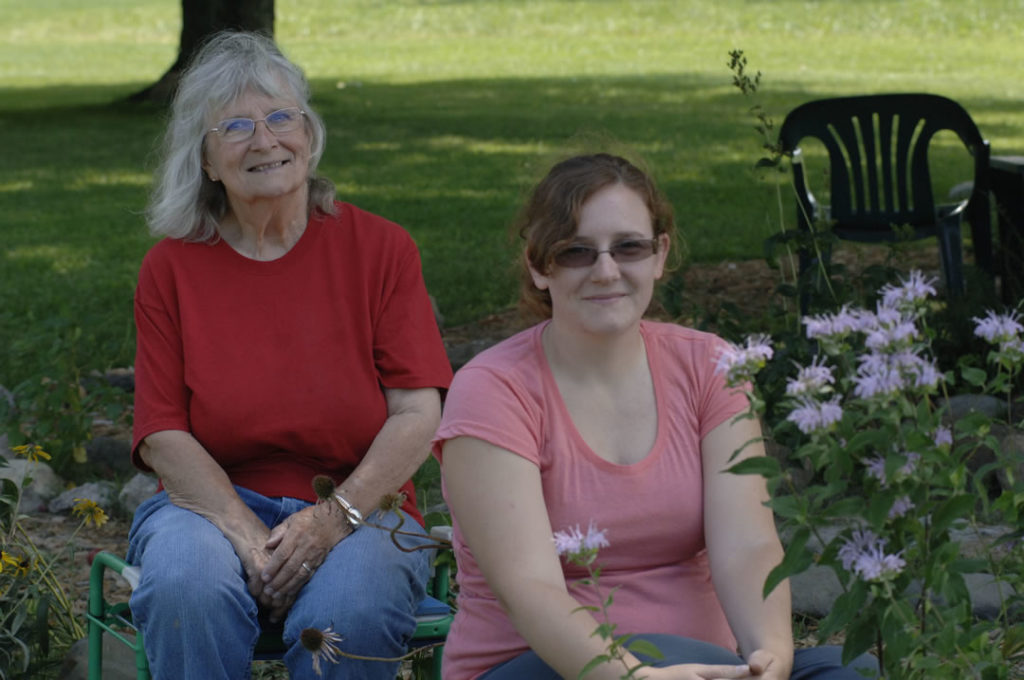 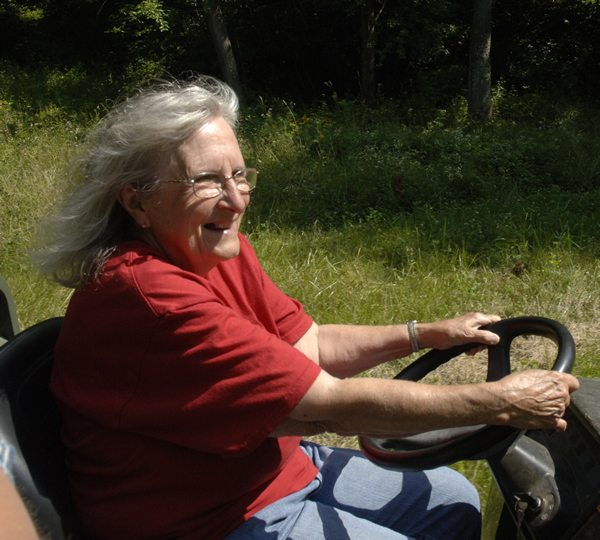 The devotion to one species in particular began several decades ago, when Lois started noticing a few Ruby-throated Hummingbirds near the house. She observed the hummingbirds more closely, putting out feeders and plants to serve as forage. As her knowledge of hummingbird behavior expanded, so did her passion for these tiny but capable birds.

Now, with four decades of experience, Lois White is an outstanding advocate and citizen scientist, and her efforts are utilized by the Illinois Department of Natural Resources, which conducts hummingbird-banding sessions three times per year (May, July and August) on the property. Hummingbird Haven is also open to the public, at no charge. During my visit, a couple from the Chicago area arrived unannounced, having driven almost four hours, to relax and observe hummingbirds in the comfortable shade of Lois White’s front yard. Thirty minutes later her phone rang. The coordinator of a master gardening program was calling to arrange a field trip for a group of participants. “We’ve had bus loads of people arrive,” said Lois. In 2014 more than 2300 visitors traveled to rural Fulton County to visit Hummingbird Haven. 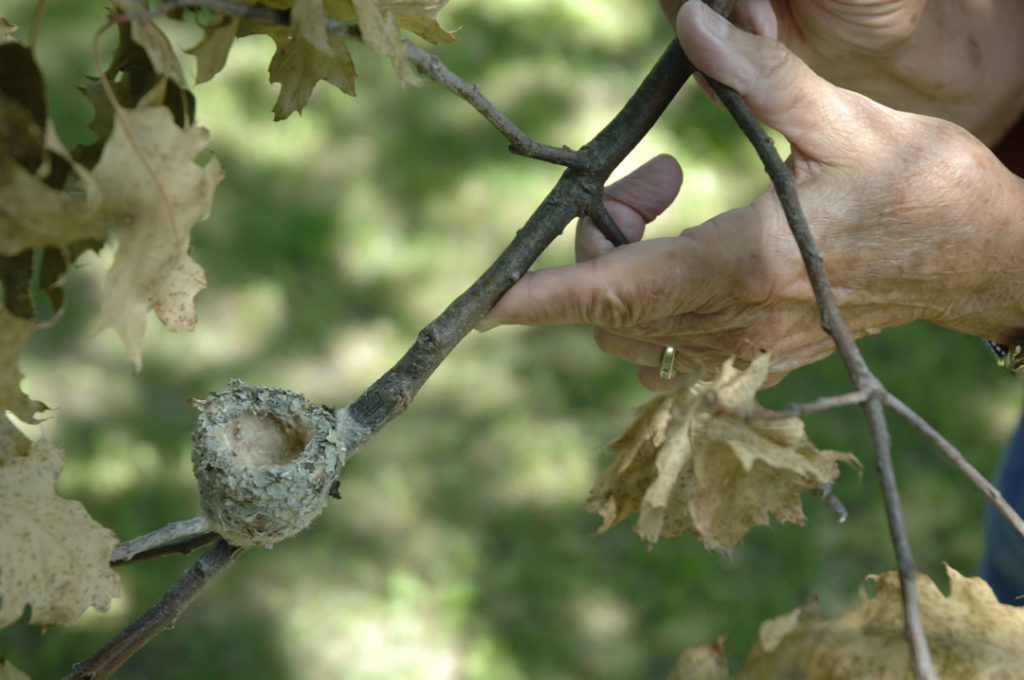 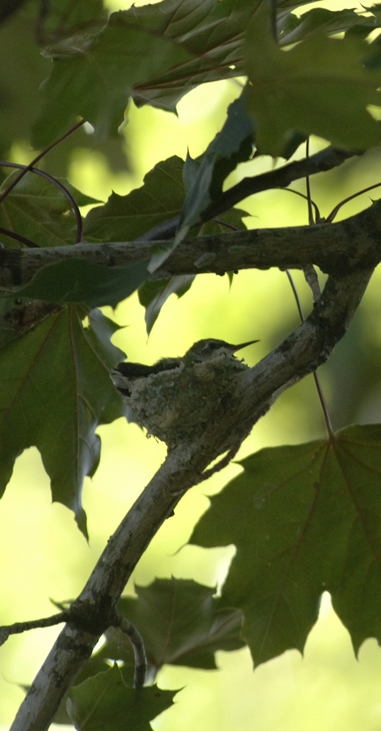 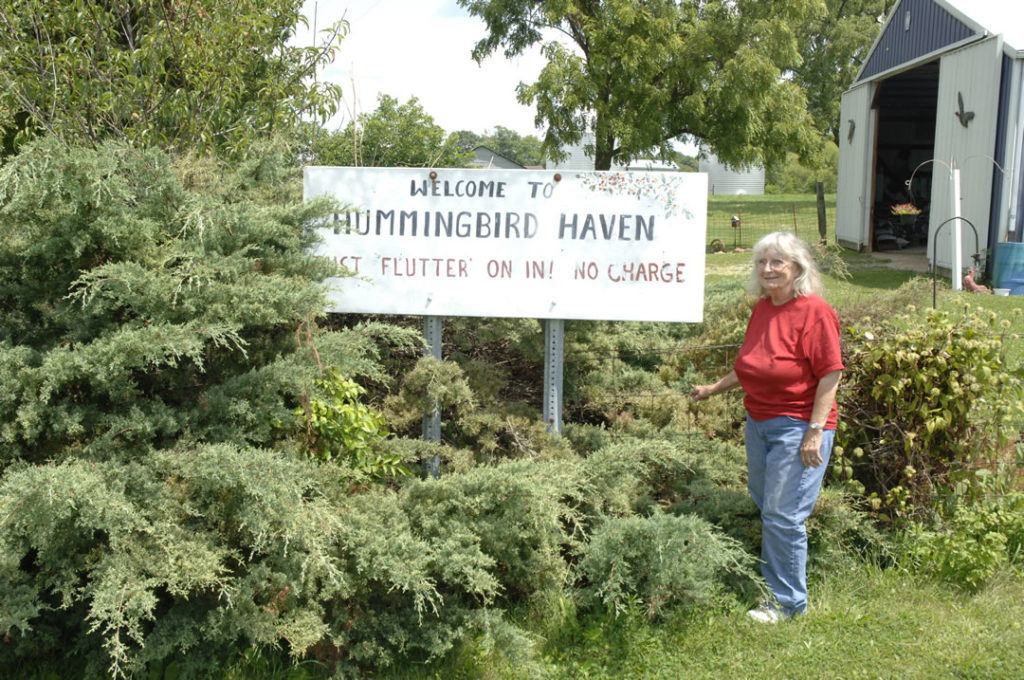 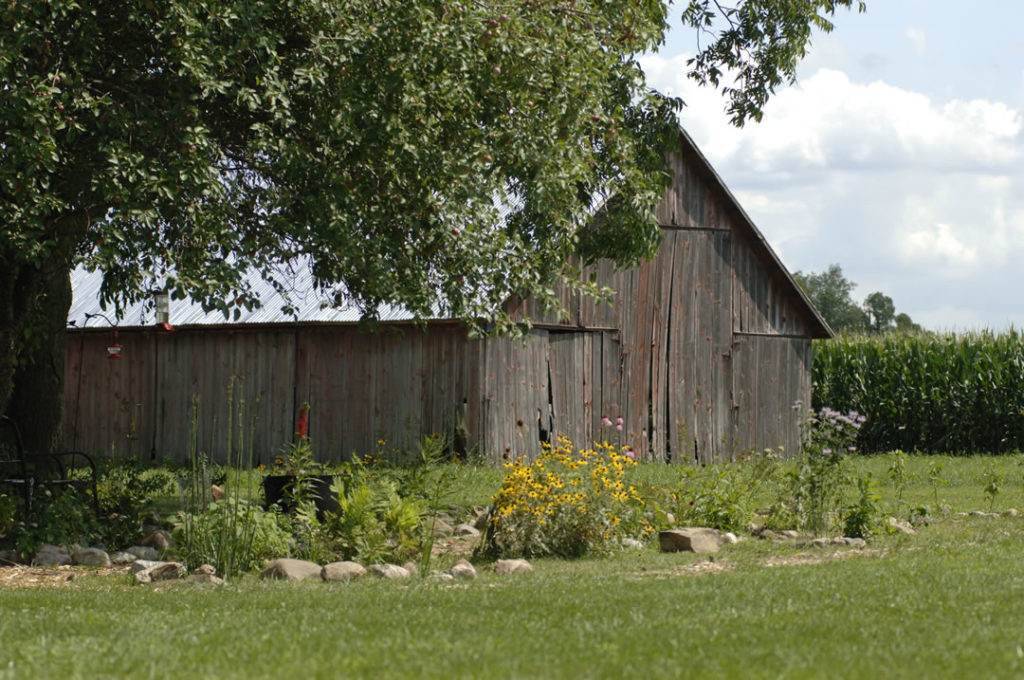 The Ruby-throated Hummingbird (Archilochus colubris) sustains on nectar and small insects. Nesting within deciduous woodlands of the eastern United States and Canada, it is the only breeding hummingbird species native to the eastern United States. Every year Ruby-throated Hummingbirds migrate north from Central America to mate, often undertaking a direct flight over the Gulf of Mexico, quite a feat for a bird weighing less than 0.2 ounces. After reaching their breeding ground, Ruby-throated Hummingbirds will mate one or two times per season, with females occasionally building new nests while their first fledglings are still dependent. According to Lois, she has observed 3-4 fledglings per female in a single season, due in great part to the ample food, protection, and nesting supplies provided at Hummingbird Haven. Unaided, Ruby-throated Hummingbirds usually fledge 1-2 young per season and have been known to live up to nine years. A recent banding session at Hummingbird Haven captured an adult that had been banded seven years earlier. “They’ll keep coming back, year after year,” Lois said.

While eating lunch at a local cafe, Lois pointed out a collection of hummingbird feeders that were hanging around the building’s windows. Some of the feeders were quite ornate, of which Lois said, “That feeder is for the people, not for the birds.” Indeed the feeder, forged in the shape of a fish, was quite ornate but contained many difficult-to-clean glass folds, and lacked a suitable perch. “Young [hummingbirds] can expend as much energy hovering for food as they consume from the food source itself,”  she said. 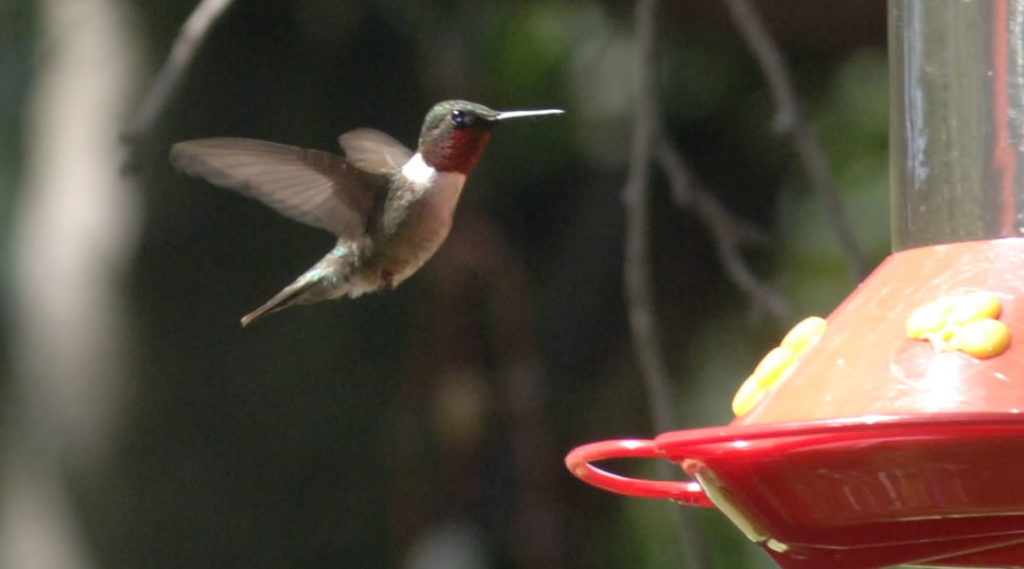 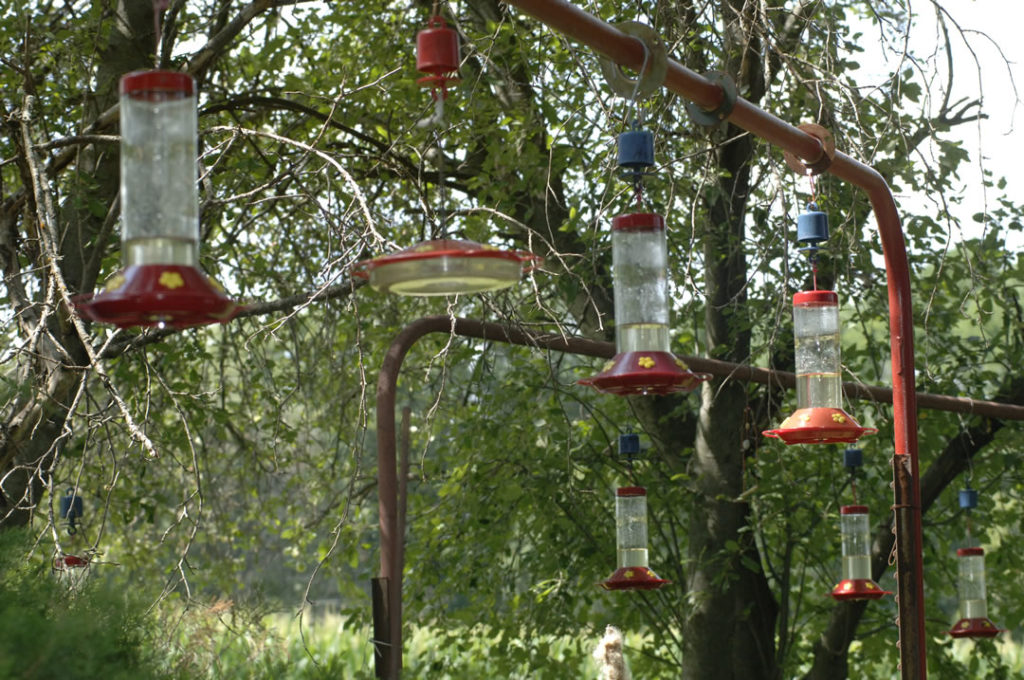 Feeders take up quite a bit of Lois White’s time. With over fifty feeders strategically placed around the property, a substantial effort is made to clean and re-supply them regularly. Bulk amounts of cane sugar, which is boiled into simple syrup “nectar,” must be replaced every 3-4 days to prevent fermentation. Fermentation and contaminated feeder reservoirs are detrimental to a hummingbirds’ health. Just as harmful are the red dyes added to commercially mixed hummingbird feed. “These feeders are designed to attract [humming]birds without the added red of food coloring” which, according to Lois, causes irreversible kidney damage. “We need to get the word out, and tell people that this red colored feed is killing our [humming]birds.”

From Feeders to Forbs

Several years ago Lois’ granddaughter Emma began learning the importance and significance of native plant communities through her undergraduate studies at the University of Illinois Springfield. With encouragement from her professor of Conservation Biology, Emma started planning a native pollinator garden at Hummingbird Haven. The initial garden was staked out and arranged two years ago, and included a Mix & Match Potted Tray from Prairie Moon Nursery. “The flowers [plants] we received were absolutely beautiful and strong enough with minimal care after planting” Emma said. “We have been very happy with the plants that were sent to us.”

After a few plants began to flower, Emma and Lois noticed that the hummingbirds were singling out the native flowers, favoring them over the non-native species. In the second year, they decided to expand the pollinator garden with another Mix & Match Potted Tray and seed packets of twenty-five species.

Now a first year graduate student with a focus in pollinator and plant interactions, Emma is pushing ahead with the research that she started two years ago at Hummingbird Haven. This spring, in the pollinator garden’s third year, Emma and Lois plan to expand the garden perimeter with native forbs (wildflowers) and grasses, utilizing their third Mix & Match Potted Tray. “It’s amazing how the hummingbirds fly right to the natives,” Lois marveled. “We’re getting so many people that want to see the native garden, even though it’s only in its second year. People want to see our native plants.”

Visitors are welcome during the summer breeding season but are encouraged to call ahead of time. Visitors are also encouraged to attend one of the seasonal hummingbird-banding days. There is no cost to attend, but for a $5 donation to the Lincoln Land Birdbanders Association, you can “adopt” a hummingbird.

When referring to “pollinators,” most people think of the charismatic species: butterflies, such as the Monarch, or bees, such as the introduced European Honeybee. In reality tens of thousands of species provide the essential reproductive role of pollination. Beyond the 12,000+ North American Lepidoptera (butterflies and moths) species, or 4000+ North American species of native bees, beetles, flies, bats, and birds, like hummingbirds, play an essential role in the reproductive cycle of plants.